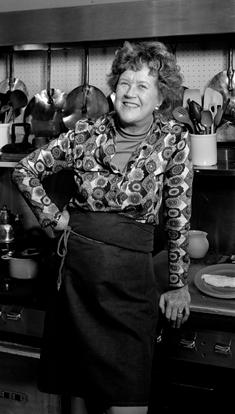 I met Julia Child in 1975 because her beloved husband, Paul, was ill and unable to take photographs for her next book, From Julia Child’s Kitchen. Julia and Paul met during WWII while both were serving in the Office of Strategic Services, the OSS. After the war was over, Paul was assigned to the United States Information Agency (USIA) in Paris. Julia decided to go to cooking school, and as the saying goes, the rest is history. Paul was a skilled photographer and took many beautiful black & white photos in France. It was their expectation to have Paul do the photography for the book.

Paul suffered a heart attack complicated by several strokes during a bypass operation, leaving him in poor health. Each chapter in From Julia Child’s Kitchen features a beautiful black & white image from Paul’s pictures in France. It became my job to take all the “how-to” pictures and the book cover.

Julia’s publisher was Alfred A. Knopf, a client of mine at the time. Previously I had taken a portrait of Thalassa Cruso for the cover of her book, Making Things Grow (Knopf 1969). Thalassa, the English plant lady, was another big star at Boston’s famous public television station, WGBH-TV. When I discovered I would be working with Julia, I was thrilled to work with another power house.

It was fun working with Julia; she was the same person on and off camera, truly a one of a kind.