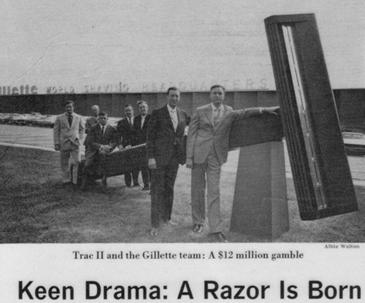 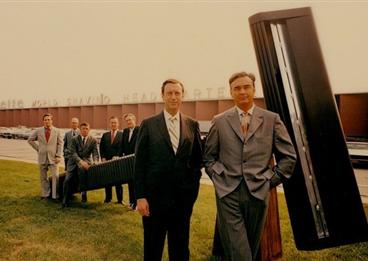 Gillette Corporation introduced their revolutionary TRAC II razor in 1971 at their Boston headquarters; Newsweek sent me to photograph the press conference. A beautiful 25 foot model of the razor was crammed into a small lobby area of Gillette’s main building. Sandwiches, soft drinks, promotional material, and hundreds of promotional TRAC II razors covered a table.

Reporters and photographers quickly ate, took TRAC II razors, and left. I stayed behind and began talking to a tall, well-dressed, Gillette executive who turned out to be William Salatich, the President of Gillette North America. He was unhappy with the press conference.

I told him I was taking pictures for Newsweek Magazine and had a deal for him. My idea for the photograph was having the huge TRAC II razor moved outside on the lawn in front of the gigantic Gillette World Shaving Headquarters sign spanning the building.

We went outside and checked the sun’s position and determined where the razor should be placed. He promised me no other photographer could use my “set-up” for this photo, and the model of the razor would be returned to the lobby after I took the picture.

Several members of the TRAC II team had flown back to Canada, and Mr. Salatich made immediate arrangements for them to fly back over night. The next day everyone was on hand and I took the picture.